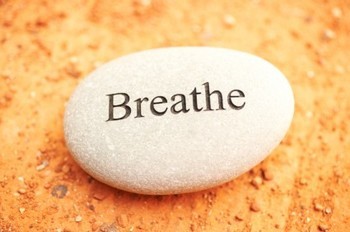 Before we can improve our breathing we must remember that the process existed long before we did – we have nothing to teach it. What we have to do is to prepare ourselves to receive its revitalizing strength by removing any obstacles that might hinder its good effects. Proper breathing depends on our eliminating tension, correcting bad habits, wrong mental and physical attitudes; the moment we get rid of these obstacles it will come into its own and bring us vitality and good health.

High breathing refers to what takes place primarily in the upper part of the chest and lungs. This has been called “clavicular breathing” or “collarbone breathing” and involves raising the ribs, collarbone and shoulders. People with asthma, a tight belt, a full stomach or who otherwise become short of breath tend to resort to high breathing. One may deliberately draw in his abdomen and force its contents upward against the diaphragm and into the chest cavity in order to cause high breathing. High breathing is naturally shallow and a larger percentage of it fails to reach the alveoli and enter into useable gaseous exchange. This is the least desirable form of breathing since the upper lobes of the lungs are used and these have only a small air capacity. Also the upper rib cage is fairly rigid, so not much expansion of the ribs can take place. A great deal of muscular energy is expended in pressing against the diaphragm and in keeping the ribs and shoulders raised abnormally high. This form of breathing is quite common, especially among women, probably because they often wear tight clothes around the waist which prevents the far superior abdominal breathing. It’s a common cause of digestive, stomach, constipation and urogenital problems.

Low breathing refers to what takes place primarily in the lower part of the chest and lungs. It is far more effective than high or mid breathing. It consists mainly in moving the abdomen in and out and in changing the position of the diaphragm through such movements. Because of this, it is sometimes called “abdominal breathing” and “diaphragmic breathing.” Sedentary persons who habitually bend forward while they read or write tend to slump into low breathing. Whenever one slouches or slackens his shoulder and chest muscles, he normally adopts low breathing. We often use low breathing when sleeping. But whenever we become physically active, as in walking, running or lifting, we are likely to find abdominal breathing inadequate for our needs. To do low breathing, when you inhale you push the stomach gently forwards with no strain. When exhaling you allow the stomach to return to its normal position.

This type of breathing is far superior to high or mid breathing for four reasons:

Middle breathing is a little harder to describe since the limits of variability are more indefinite. Yet it is breathing in which mainly the middle parts of the lungs are filled with air. It exhibits some of the characteristics of both high breathing, since the ribs rise and the chest expands somewhat, and low breathing, since the diaphragm moves up and down and the abdomen in and out a little. It has been called thoracic or intercostal or rib breathing. But too often it also remains a shallow type of breathing. With this form of breathing, the ribs and chest are expanded sideways. This is better than high breathing, but far inferior to low breathing and the yoga complete breath technique.

The complete breath, as defined by yoga, involves the entire respiratory system and not only includes the portions of the lungs used in high, low and middle breathing, but expands the lungs so as to take in more air than the amounts inhaled by all of these three kinds of breathing together when they are employed in shallow breathing. The complete breath is not just deep breathing; it is the deepest possible breathing. Not only does one raise his shoulders, collarbone and ribs, as in high breathing, and also extend his abdomen and lower his diaphragm, as in low breathing, but he does both as much as is needed to expand his lungs to their fullest capacity.

Keep in mind that this type of breathing is only done when you do the breathing exercises. The rest of the time you should be doing low breathing by pushing the stomach out slightly when you inhale, and then just letting the stomach fall back to its original position when you exhale. Also, make sure you are breathing through your nose and not your mouth.