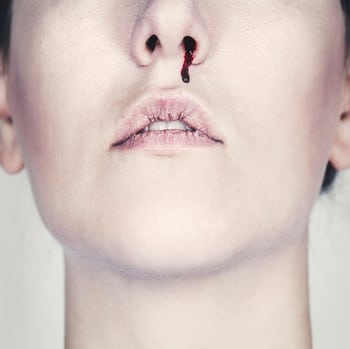 Nose bleeds, otherwise known as an Epistaxis can often be the result of events that are related to some type of external or internal trauma to the nose.  This trauma causes the rupture of the blood vessels inside of the nose.  Some nose bleed are known as idiopathic, meaning, occurring or arising spontaneously and with unknown reason.

No need to alarm, it is rarely a life threatening situation and if you are an apparently healthy individual, not on any medications and without any major complications relating to your blood’s clotting factors your nosebleeds will spontaneously stop within 5-10 minutes on its own.

However, if not controlled properly and succinctly can produce a messy scenario with uncontrolled, prolonged bleeding.  This article will provide some insight into a wide variety of globally accepted methods of controlling a nosebleed.  Take what is useful and leave what is not.

Those who have frequent nosebleeds should seek out personal medical attention as it may be a sign of infection, environmental changes (low humidity), severe allergies or possibly a warning sign of other systemic or genetic problems  as in Leukemia, Hemophilia or Anemia.

As stated above, bleeding from the nose is caused by the rupture of small blood vessel from the septum and wall of your nose.  The blood supply to the nose is originally derived from branches off the heart that migrate all the way up the neck and face inside the nose to an area called Kisselback’s Plexus (KP) in the front and Woodruff’s Plexus (WP) in the back.

In addition, the Superior Labial Artery, a branch off the facial artery located in the space between your nose and the lips is also a vessel rich in blood flow to the interior nose and we will soon learn, it can be used as a method to cease a nosebleed.

There are two main types of nose bleeds and they are named by where the bleeding is coming from either the front or back of the nasal cavity. 90% of the time, it is an anterior nosebleed while 10% of nosebleeds are posterior nosebleeds.  The former being the most common and easiest to treat, while the latter are more serious and may need greater medical intervention.

2.     Modified Trotter’s Method – Adding ice over the bridge of the nose in addition to manual pinching as well as leaning forward.

3.     The Martial Arts Method – In this method, the artist is to jump up and down 5X with emphasis on a hard and strong landing which jars the entire body.

4.     Chinese Medicine – Sit the patient down, extend the knee and dorsi-flex the foot of the opposite nostril that’s bleeding.  First thump and then smack the patient’s bare heel.   With the heel of your fist, actually bang or thump 10 X on the heel of the patient and then proceed to do the same thing but now smacking the heel. Repeat that 2-3X.

5.     Superior Labial Artery Pressure – Simply apply pressure underneath your nose or on your philtrum.  It is similar to as if you were trying to stop a sneeze.  This pressure stops blood flow to the anterior of chambers of the nose thus preventing some blood flow. This will in turn slow down and in many cases stop a many nosebleeds.

6.     Cauterization – When I work the corner of a boxing / martial arts match or cover a contact sport practice or game, I personally carrySilver-Nitrate Cautery Sticks in both my medical kit and my corner man’s kit. I also have found that OB/GYN‘s use Scopette’s which are ideal for absorbing blood from the nose. They are like huge Q-Tips.  Vaso-constricting sprays are also easy to find and use.

7.     Nose Plugging – Here, the ATC, First Aider or First Responder packs then nose with gauze or rolled cotton.  I personally used to keep a few tampons in my ATC kit for this exact situation. They work just as well as anything else and can come in handy in an emergency situation.

8.     Medical Nose Packing (Anterior / Posterior) Nasal Packing is the medical method to control severe nasal bleeding.  Physicians can either pack the anterior or posterior nasal cavities and is usually seen in patients after surgery.

9.     Adrenaline Hydrochloride – (1:1000 epinephrine solution), Avitene, Thrombin and Gelfoam.  All or some of these behind the counter items are kept in medical bags in order to control ocular cuts and nose bleeds.

Sideline TX  (for the ATC)

2.     Silver Nitrate sticks can be kept in medical kit

3.     Avoid digital manipulation of the nose with fingers or other objects (epistaxis digitorum)

4.     Consider using a humidifier in the bedroom can provide moisture to the air softening blood vessels.

5.     Keep a vaso-constricting spray at home to use only if needed when nosebleeds get severe.