No one disputes the importance of regular exercise. Unfortunately, there are so many fitness programs available today, the general public is often confused as to which are the best. Consequently, they are the willing guinea pigs of every fitness fad that comes along. 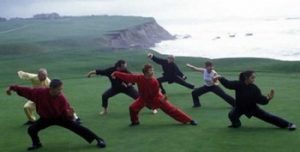 The Chinese have always maintained that inactivity is the major cause of illness. Thus, they have developed numerous systems of medical gymnastics both to cure as well as prevent disease. Of the many exercises they have devised, they consider the martial art tai chi chuan to be the best.

Tai chi chuan has many distinct advantages over other types of exercise. The biggest shortcoming of most systems of physical fitness is that they service only part of the body. They concentrate on certain muscles or muscle groups, while neglecting others entirely.

For example, isometric exercises tense one set of muscles against another set or an immovable object. Because this is a one-dimensional exercise, the benefits are minimal.

Another problem with isometrics is there is really no way to measure the correct amount of exercise. Unlike calisthenics or weightlifting, you cannot simply increase the number of repetitions and expect results. Recent evidence has also found that isometric exercises render joints more vulnerable to injuries.

Calisthenics produce a wide range of motion and give the muscles more staying power than isometrics. Unfortunately, calisthenics also concentrate on only individual muscles and thus have little benefit on overall health. This is also true with weightlifting.

Tai chi, on the other hand, brings into play every part of the body and benefits all bodily parts, not just the musculoskeletal system.

Other Benefits of Tai Chi

Perhaps tai chi’s greatest attribute, however, is the fact it channels the flow of chi (intrinsic energy) through the body’s meridians. According to traditional Chinese medicine, as long as this flow is uninhibited, a person will remain healthy. If the flow of chi becomes obstructed or unbalanced, illness will result. The correct practice of tai chi chuan guides the individual’s chi through the meridians and restores its balance throughout the body. None of the aforementioned exercises offers any of these benefits.

Many people believe that tai chi chuan does not develop the same degree of cardiovascular fitness as high-impact exercises, such as jogging, rope-jumping, cycling or aerobic dancing. This is not true, however.

In 1978, noted tai chi instructor Lawrence Galante and an associate conducted an experiment to determine whether tai chi chuan is effective in stimulating cardiovascular development. They used 25 tai chi students, ranging in age from 20 to 60 years old, as their models. The students had been studying the yang-style tai chi short form for a period of one to seven years.

Galante and his assistant monitored the pulse rate, blood pressure and heart rate of all the students before and after they practiced the form. In all cases, the researchers found that if the form was practiced in a low stance, great cardiovascular stimulation occurred-between 60-80 percent of the maximum heart rate established by the American Heart Association (AHA).

On the other hand, if the tai chi movements were performed in a high stance, there was very little heart stimulation (less than 60 percent of the maximum heart rate). However, for people who suffer from high blood pressure, or those recovering from heart attacks or heart surgery, the high stance is a better option. According to Galante, a person can easily meet the standards set by the AHA by practicing tai chi chuan three times a day.

Dr. John Painter, a Fort Worth, Texas based teacher of internal Chinese martial arts, claims that “When the movements of tai chi chuan are performed quickly or in a lower formed stance, they have the same beneficial effect on the cardiovascular system as jogging or high-impact aerobics, but without the stress and strain.”

According to Painter, greater physical stimulation can be achieved by performing the movements slowly while wearing weights on the ankles, arms or body.

Although some doctors claim high impact physical activities are the best health-building exercises, a growing number of medical experts believe that the hazards of their long-term practice outweigh the benefits.

According to psychologist Dr. Jo Ann Hunter Farr, high-impact aerobics can produce health benefits over the short term, but the long-term implications of such exercises are irreparable damage to the joints and internal organs. Vigorous walking or tai chi practice, she claims, are much safer forms of exercise and offer the same health benefits as high-impact exercises.

Dr. Wen Zee, a retired cardiologist in Shanghai, believes tai chi is “an incomparable exercise because it never accelerates the heart rate. Exercises such as running and jogging can injure the heart.”

Many other medical experts are warning that strenuous exercise may shorten a person’s life. According to John Hall, who writes a medical column for an internal Chinese martial arts magazine, for a fitness program to be conducive to long life and health, it must take into account the balancing of body fat levels as well as the other necessary factors for proper exercise.

“The ideal fitness program will provide some form of consistent, progressive, sustained movement of the legs, torso and arms to benefit and improve the flexibility, strength, stamina and aerobic potential of all [bodily] systems,” Hall asserts. “At the same time, the exercise program must help to ward off obesity without exceeding the capacity for recovery. Tai chi chuan…more than adequately meets these requirements.”

Another problem with high-impact exercises is they are incomplete physical activities. Aside from the cardiovascular and musculoskeletal gains, they benefit none of the other bodily systems. Tai chi, however, has a salubrious effect on all bodily systems. Furthermore, aerobic exercises do not have any of the other health benefits of tai chi chuan.

Finally, tai chi may be practiced by virtually anyone, regardless of age. This is not the case with high-impact exercises. In fact, doctors recommend that no one of middle or old age engage in any of these activities without first undergoing a complete physical examination.

The postures of hathe yoga provide many of the same health benefits as tai chi chuan. Unfortunately, some of the yoga positions may be held for three minutes or longer, which can be very taxing on the body. Brief rest periods are therefore needed. Tai chi practice, on the other hand, does not require any rest period because the postures change too quickly to tire the body.

Yogic inverted postures, such as the headstand and shoulderstand, offer two advantages not found in tai chi chuan. First, they relieve the gravitational pressure on the internal organs and glands. And second, they ease the strain on the heart caused by having to pump blood against the force of gravity. Yoga exercises, however, do little to promote cardiovascular endurance.

Moreover, many people cannot perform certain yoga exercises because of health problems. Tai chi chuan, in contrast, may be practiced in virtually any state of health.

The yoga breathing techniques, known as pranayama, have many health benefits. They increase energy levels within the body, strengthen the immune system as well as the internal organs and glands, reduce stress, purify the body and improve memory. They also enhance the cellular expulsion of carbon dioxide, increase arterial circulation to the brain, reduce levels of lactic acid in the muscles, and stimulate intestinal peristalsis.

Unfortunately, if these exercises are practiced incorrectly, they can cause serious mental disturbances. Tai chi chuan does not present these problems. In tai chi, deep breathing is never imposed on the student; it is developed step by step. The student learns to gradually coordinate his breathing with the movements. This is perhaps the greatest advantage tai chi has over yoga.

One final advantage of tai chi is that it can also be used for self-defense.