What’s the Deal with Vitamin D? 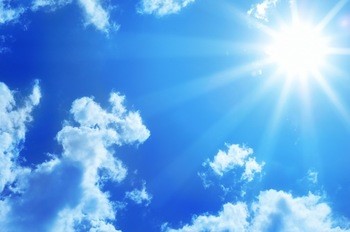 Vitamin D, otherwise known as the “sunshine vitamin” or Calcitriol has so many benefits in the body. The wide range of effects are in so many systems from the musculo-skeletal system to the immune system. Vitamin D is classified in the nutrition world as a fat-soluble vitamin along with Vitamin A, E and K. Fat soluble vitamins, are essential for health and are stored in the liver and do not need to be replaced every day like water soluble vitamins.

Unlike other nutrients or Vitamins, Vitamin D isn’t really a vitamin at all. It’s really considered a hormone. It is synthesized by the body through direct sunlight, specifically the UV-B rays. Ethnicity, time of day, season, pollution levels, latitude on earth, and increasing age all affect our body’s uptake of Vitamin D.

Vitamin D is best known for working in conjunction with calcium in your body to help build and maintain strong bones. Vitamin D is also widely known for its effects on Seasonal Affective Disorder (SAD). SAD is a type of depression that happens during the winter months, when there’s not much sunlight.

It’s often treated with photo (light) therapy. Several studies suggest that the mood of people with SAD improves when they take Vitamin D. So not a bad idea for the people in countries that are closer to the north-pole and receive less sunlight throughout the year like Norway and Sweden.

Recent research produced positive results on Vitamin D’s effects on cancer. There is some evidence that getting enough vitamin D may lower your risk of certain cancers, especially of the colon, breast, prostate, skin, and pancreas.

This evidence is based mostly on studies of large groups of people or population studies, and doesn’t prove a direct correlation between taking vitamin D and lowering your cancer risk quite yet, but laboratory studies are positive and show that vitamin D may potentially have anti-cancer effects. Another field where there is also some burgeoning research is on pregnancy.

Research shows an association between Vitamin D deficiency and possible complications leading to gestational diabetes, pre-eclampsia, low birth-weight, preterm labor, cesarean delivery and infectious diseases. While the studies identified a significant association between low vitamin D levels and an increased risk of complication during pregnancy, most researchers reveal that further research is needed to determine whether programs to boost vitamin D levels in pregnant women would reduce those risks directly and if a Vitamin D regimen is warranted. One population where it is warranted is in the sports and athletic world.

What many people don’t know, is that Vitamin D also plays a huge role in muscle physiology and sports performance. The muscle fibers affected the most by decreased Vitamin D levels are our fast twitch type II muscle fibers. There are also reductions in the function of other fiber types but a lack of Vitamin D can directly affects the atrophy of the type II fibers more with fatty infiltration and fibrosis noted in the muscle tissue itself.

Supplementation without a doubt has proven to help and aid in the reversal of type II muscle atrophy. Many recent studies confirm Vitamin D’s function in muscular function and recovery and so do some of the archived research.

This concept of improved performance through UV-B rays or sunlight is not new. In the early 1930′ and 40’s some of the athletes and doctors in the eastern bloc countries specifically, Russia and Germany were vigorously experimenting with a wide variety of ergogenic aids in sport.

Many studies show that athletes with injuries had a significantly reduced level of Vitamin D in their blood as compared to non-injured peers. Some strong input to ensure adequate Vitamin D in our body, especially if partaking in regular exercise. The next question one may ask is what type and how much Vitamin D does one need to take?

There are two forms of Vitamin D out there. D2 and D3. D3, the human form is not only the more potent version but should be the only version used in dietary supplementation. D2 is known as the plant form of Vitamin and is beyond the scope of this article. Vitamin D or D3 is usually produced by incidental skin exposure to the sun but very small amounts can be acquired from dietary sources like wild salmon, cod, pacific rockfish, tuna, flounder, mushrooms, ricotta cheese and fortified milk.

Melanin, a pigment found in the skin helps block the sun’s rays and protects us from overexposure. This is why white people turn tan, it’s the melanin. The dark skin of Africans or Afro-Americans, who already have melanin present actually blocks greater than 95% of the vitamins production.

Although melanin is found in almost all skin types other cultures can absorb Vitamin easier. Indoor sports like basketball, gymnastics and fencing or prolonged indoor work environments, especially in urban areas where sunlight is minimized affects the skins Vitamin D absorption.

Furthermore, a recent NFL study on the NY Giants revealed that 81% of the team showed up at spring practice with reduced levels of vitamin D. In the news even more recently is the compound fracture sustained by the University of Louisiana, guard Kevin Ware. In this situation, his physicians are directly relating this fracture to his extremely low levels of Vitamin D, lowering the strength of his bones.

There is a strong relationship between Vitamin D sufficiency and optimal functioning of the musculo-skeletal system. Lack of D directly causes slow peak muscle contraction, prolonged time to relaxation, deficient state like rickets (Rickets is a softening of bones in immature mammals due to deficiency or impaired metabolism of Vitamin D), generalized myalgia, profound myopathy including muscle weakness, lack of muscle tone and gait abnormalities.

One may also inquire as to how much exposure of sun does one really need in order to get full benefit of Vitamin D absorption. The consensus is 5-10 minutes as a minimum but up to twenty minutes has long been documented. The ideal time, is in the summertime between the times of 10am and 3pm. The optimal time of 20 minutes of sunlight is ideal to ensure proper levels of D, but how much is needed if we supplement?

At the present time, labels either use IU (international units), micrograms or ng/ml nanograms/milliliter). In the lab you will see ng/ml but rest assure on the label it will either be IU or mcg. For a precise intake of Vitamin D see Table- 1 for RDA Levels.

Finally, some newer studies have shown a link between Vitamin D and the mediation of the immune system. Increased levels of Vitamin D reduces systemic inflammation in the body and possibly aids in the reduction of overtraining tissue. Increased levels of D also show a reduction in reported incidence of colds and flu. Studies prove that when Vitamin D is absent, the cells of the immune system are more likely to attack the healthy cells of the body (autoimmunity).

Vitamin D deficiency isn’t the only or even the primary cause for autoimmunity, it’s just not good for the immune system when vitamin D is low. Unfortunately, it’s not clear yet how much Vitamin D you need in your body to reduce the impact of autoimmunity on health.

Furthermore, deficiency rates have tripled from 1994 to 2013. A recent US national survey taken over a 10 year period showed that 97% of Afro-American were deficient in vitamin D. Subgroups within the black population are at even greater risks and some of the black subgroups that are in greatest danger include the elderly, institutionalized persons such as hospitalized and incarcerated blacks.

Vitamin D levels are correlated with numerous systemic effects in many populations. Athletes or people suffering from stress fractures, muscle pain, and frequent illness should look into their own levels. I believe everyone should audit their own blood levels in order to ensure optimal health and well-being. This deficiency is easily treated with standardized, generally safe and effective oral supplementation protocols. (See Table -1)

For more information or to get in touch with Dr. Scott Weiss, contact Scott@Fifth Avenue.com.